The above commentaries, both from respected figures could not be more contradictory. One claims blenders kill up to 90% of the nutrition. The other claims that they can actually turn ordinary foods into ‘super foods’.

Dr. Brian Clement, of the first quote above, runs a medical clinic focused on using high nutrition diets to treat illness. He claims that his statistics are backed by data, tests, and field trials conducted at his institution, as well as MIT and other leading universities. He says he drinks a quart and a half of green juice every day because juicing is much more nutritious than blending.

David Wolfe is a successful author of several books about health and nutrition. He has not provided evidence or a link to studies to support this particular claim about how blending foods enhances their nutrition in any public forum as far as we are aware, but proclaims that blending is the best way to realize the nutrition from food.

So, how can two respected figures support theories that are so radically opposed? We were perplexed by the same question, so we commissioned laboratory tests in December 2013 from the Australian Government National Measurement Institute in Melbourne.

The testing revealed that green juice made in a juice extractor contains up to twice the concentration of key nutrients (Vitamin C, Beta Carotene) than the same ingredients blended together in the leading commercial blender, supporting Dr. Clement’s findings.

The testing also revealed that different types of blenders performed better at protecting nutrients than others. Dr. Clement believes that the better they blend, the worse they are for nutrition. As a general trend this may be true, but we found that it was also possible to achieve significantly improved nutrient retention in a high performance blender by circulating the ingredients more aggressively to share the processing load more evenly. 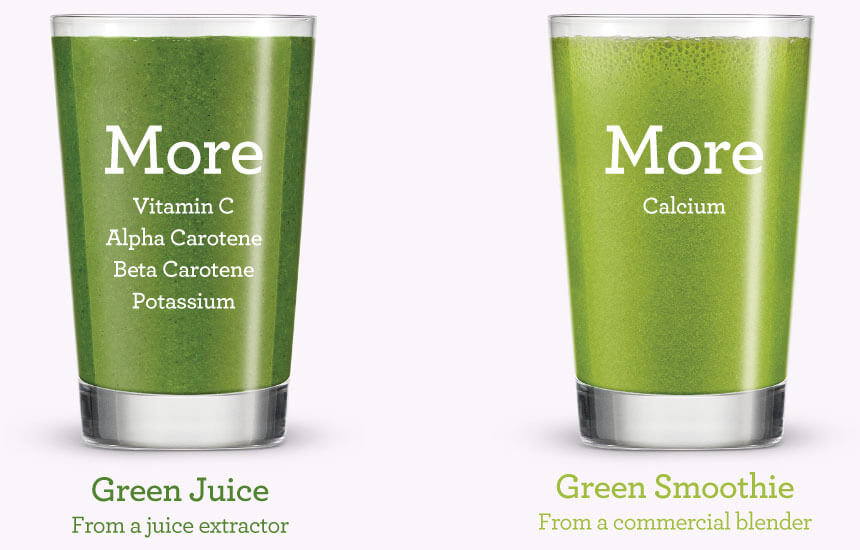 This could be because our tests involved blending the ingredients for 60 seconds, not 2 minutes like Dr. Clement. We used a 60 second blend time as most green smoothie recipes in high performance blenders require about 60 to 70 seconds to achieve a lump free texture, so we didn’t think blending for two minutes would be representative of normal at home use.

Here’s what happens to the nutrient concentration in a green juice vs. a green smoothie for each of Calcium, Magnesium, Potassium, Vitamin C and Vitamin A (as measured using Alpha and Beta Carotene RAE). 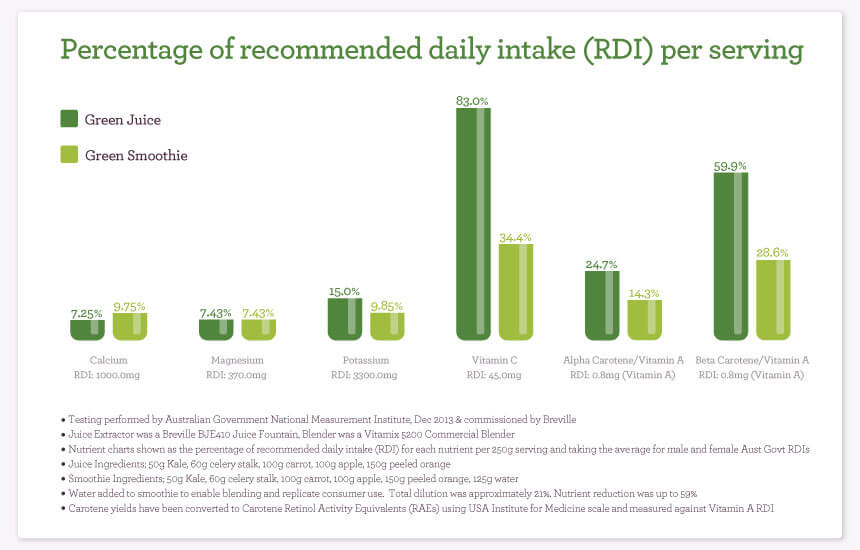 The green juice, made in the best performing fast juicer (Breville BJE410 Juicer) had a concentration of 142% more Vitamin C, 73% more Alpha Carotene, 109% more Beta Carotene and 54% more Potassium than a green smoothie blended for 60 seconds in the leading commercial blender (Vitamix 5200 Blender). Each of the green drinks was made from the same ingredients (kale, oranges, celery, carrots and apples) however water was added to the blender to allow the ingredients to combine.

To perform the test using a blender it’s usually necessary to add water so the ingredients will combine into a drinkable result. Virtually all green smoothie recipes require added liquid for this reason.

But while the end result consists of about 21% added water, the vitamin and mineral concentration is reduced by a much greater amount, indicating that the act of blending is reducing the nutrient yield. Even when compensating for the added water, juice from the juice extractor still has almost double the Vitamin C and significantly more of some of the other nutrients than its blended alternative, as can be seen in the adjusted chart removing the dilution impact shown below. 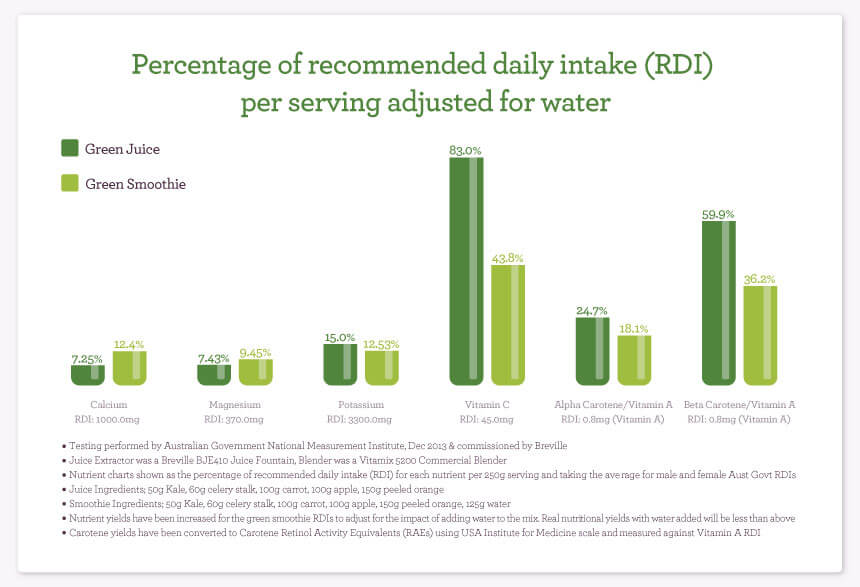 However, it’s worth pointing out that the smoothie does equally as well with Magnesium, and actually has a slightly higher Calcium concentration than the green juice, even before adjusting for added water. Unfortunately though, while leafy greens are high in Calcium, not enough of the Calcium is retained by either juicing or blending to get close to the Recommended Daily Intake (RDI). A 100g piece of low fat mozzarella for example, contains about 10 times more Calcium than a 250g green smoothie.

Based on Dr. Clement’s findings on blenders versus the Australian Government National Measurement Institute, it seems that the length of the processing time may be a big factor in nutrient destruction. Dr. Clement claims that blending for 2 minutes destroys 90% of the nutrients.

Based on the Australian Government National Measurement Institute test results, we believe that blending for 1 minute destroyed about 23% – 63% of the available Vitamin C, Carotenes, Calcium and Potassium, but less of other minerals. Our test results support Dr Clement’s observations that blending damages some of the vitamins and minerals and comparing the results suggests that the length of processing is quite important. So what happened to the vitamins and minerals?

A blender creates more heat than a juicer, but even so, they only get up to a maximum of about 28 degrees C, not enough to cause significant vitamin or enzyme damage. So, Dr. Clement’s opinion that oxidation (air pushing into the cells) is what causes most nutrient damage when blending, makes sense to us based on our research on the subject and the findings of our laboratory tests.

The best fast juicers, by comparison, process ingredients for about one tenth of a second from the moment the food cells first hit the cutting surface, until their juice has passed through the filter.

We estimate that both fast and slow juicers (which are roughly equivalent from a nutritional yield perspective), average vitamin and mineral concentrations of between 75% and 85% of what exists in the whole fruit or vegetable, but, like blending, this differs enormously from ingredient to ingredient and nutrient to nutrient.

The green smoothie results are particularly interesting when you examine the nutrition from a typical serving size (250g) and what that means in terms of the required daily intake (RDI) for the key nutrients. The green juice delivered between 83% and 85% of the RDI of Vitamin C and Carotenes (Vitamin A equivalent), more than double that of the smoothie.

The fact that there is over 80% of your daily requirements of several key nutrients in one glass of green juice suggests that it is a far superior alternative to taking vitamin supplements. Clinical studies on vitamin supplements show they have little to no benefit to health and longevity and may actually be harmful. Multiple studies however, link increased fruit and vegetable intake to a significantly longer life expectancy and lower rates of heart disease, stroke and cancer.

Based on the green juice nutrient concentrations versus the published vitamin and mineral RDIs, there is certainly a case to be made for green juice becoming part of everybody’s daily routine.

One obvious omission from the data on green smoothies versus green juice in this section is fibre. Blended drinks contain about 1.5% fibre by weight, approximately three to four times more than juice (but a very small amount of the recommended daily intake). Because of the controversy surrounding the role of fibre in juice and smoothies we share Juicing Science’s results on fibre in far more detail in an upcoming blog post. 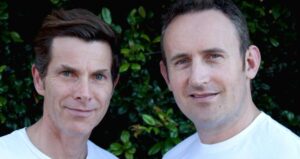 We have worked in the product development team for Breville, a food thinking kitchen appliance company, for the last 12 years. We’ve overseen the design of numerous kitchen appliances, and you could say we’re also Breville’s resident experts on juicing and blending. We have both been touched by close family and friends struggling with illnesses such as cancer, heart disease and autoimmune disease. We helped as they studied what they should eat to help their body fight these diseases; to get well and remain well. We noticed how difficult it was for them to decipher all the information available, and how often experts contradicted each other. While there was a lot of discussion about juicing and blending in relation to health, much of it was at complete odds with our personal experience. The further we looked into it we found that much of the information didn’t seem to be based on any studies or facts we could find. So we’ve commissioned seven lab tests and studies1 (with two more on the way), talked to hundreds of chefs, doctors and nutritionists around the world, and have learnt quite a lot about what separates pulp fact from pulp fiction. We’ve been shocked by both a ground swell of false nutritional claims and by seeing countless consumers, including our own families and friends, start to accept juicing and blending myths we know to be false. 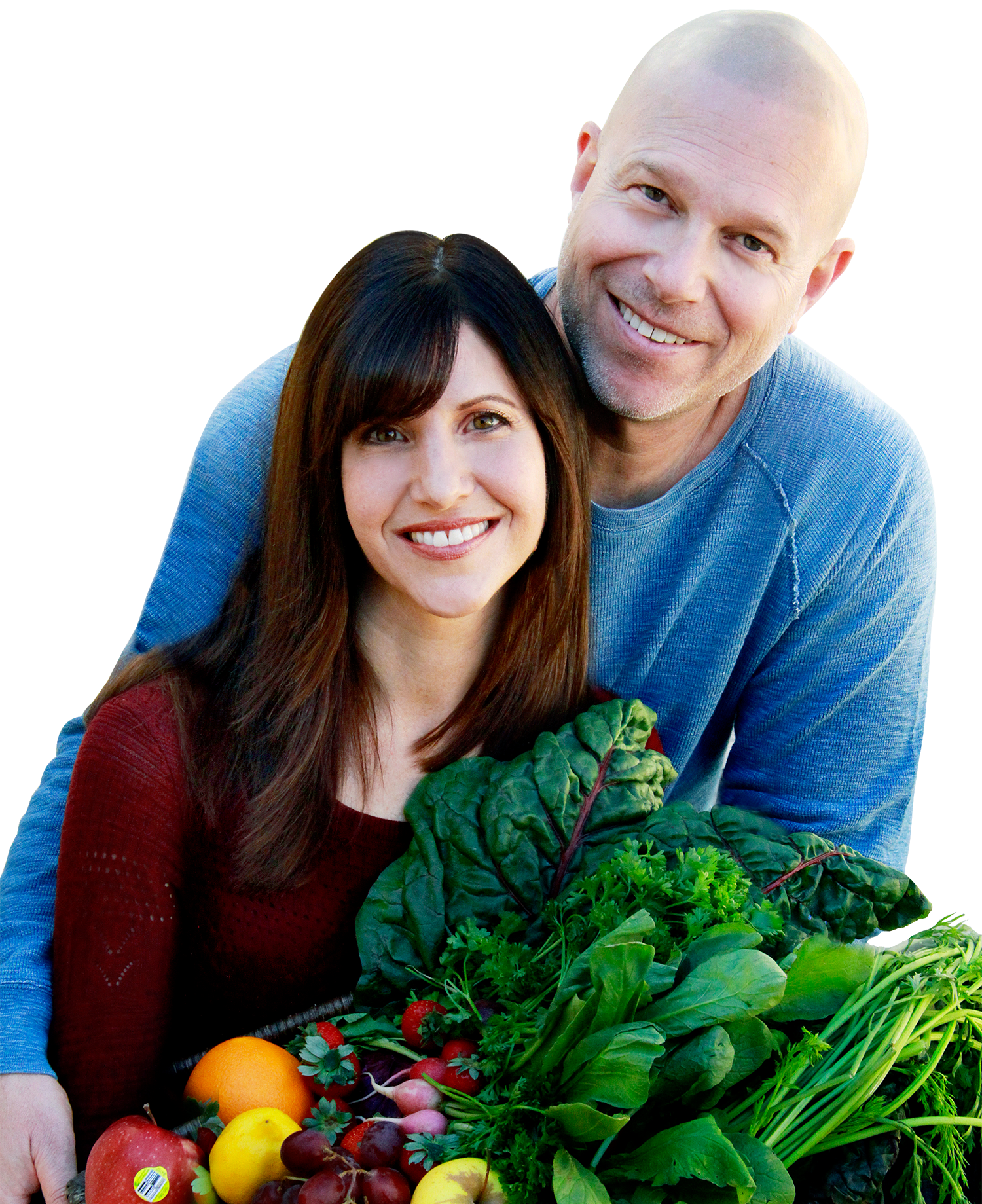 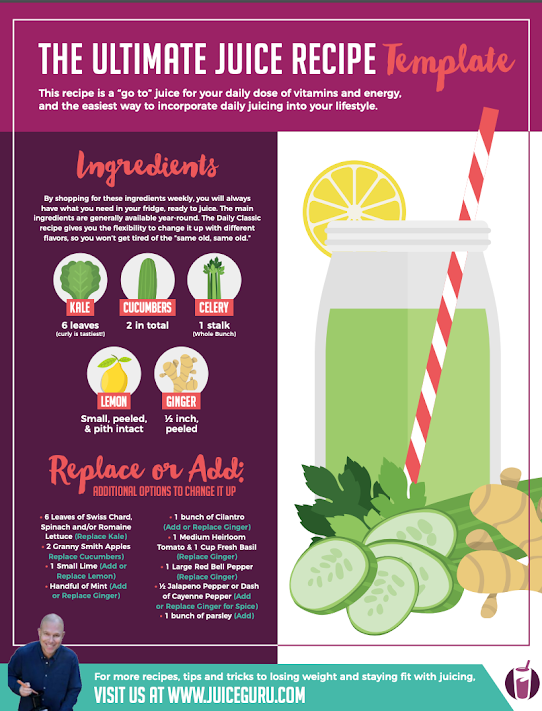